The year was 1970 J.  I ran my first competitive race in a schools road relay team in Falcarragh, County Donegal.  We won by a country mile.  We were approached by Patsy McGonagle, later to be 4 time Irish Olympics Track and Field manager, to run the following day for Glenties A.C. where he was a PE teacher.  Three of us finished in the top 4 in that race.  Shortly afterwards Patsy founded Finn Valley Athletic Club and like Forrest Gump I have been running ever since. Running with Finn Valley throughout my teens and early 20’s meant I travelled all over the country for races which was brilliant education and many a great story.

Running has defined me in so many ways.  I still get such a buzz from running that I get from no other sport (golf, cycling, swimming). I always find running clears my mind and indeed helps sort things out for me at unexpected moments.  I run for both physical and mental wellbeing.  I have met and continue to meet so many people through running.

In Finn Valley it was always about Cross Country so in a way I was more middle distance. I loved the 800m and even competed at National level in the steeple chase.  I once took part in a long jump in Threemile House annual sports in County Monaghan. Barbara will know where that is.  I won that day and why I remember it was because they dug the ‘pit’ the size of a grave with the jump board near the edge which resulted in me clearing the pit with a hard landing – Ouch.

In my early days as I said it was all about cross country running for Finn Valley featuring in teams.  I found myself working in Glenties in 1980 and was running for something to do.  People asked was I training for the marathon and at the time I wasn’t but just started to do so.  I did Dublin 1981 (3.00), 1982 (2.48) and 1983 (2.44). Don’t mind the time under the photo.  I moved to England and ran for Reading doing cross country and Track winning some 800m races, on 2 minutes, never broke it.  The BHAA races kept me going on my return to Ireland when I wasn’t attached to any club.  Thankfully my kids started running so my example rubbed off on them.  Ever since it has been about running 5km and 10kms up to half marathon until I joined TTRacers which stretched my ambition.  Nearly thirty years after I dreamed of running the New York Marathon, I did it for the first time in 2010.  There was unfinished business after that one. Preparation was key for the next one.

I am still running and loving it and that for me is the real highlight.  However on the racing front I had a few different highlights, winning a Donegal Championship Cross Country race and realising afterwards that my leg was covered in blood under the mud where I had whacked a stone ditch.  My 2.44.20 Dublin Marathon time in 1983. And more recently delivering a perfectly paced (unfinished business addressed) New York marathon in 2013 with a time of 3.29.11 with all credit due to Terry and my TT Racers training partners for that performance. The latest highlight was last year, 2019, when I won the Over 60 category in the Clontarf Half in a time of 1.38.04, note I didn’t say ‘the final’ as there is more to come.

I worked in the City Centre and many days would see these guys training around Trinity Park.  I thought I would love to do that however always used the excuse I would never make it to Trinity and back in the lunch break.  However my excuse disappeared when I moved jobs in 2009 to be located in Nassau Street.  Dan O’Carroll introduced me to Terry, and TT Racers.  I joined because I wanted to challenge myself and had been doing all my training on my own with no real structure.

Being part of TTRacers for me is all about belonging to this fantastic community and everyone being treated the same and with respect. I take great pride in telling people about my training group TTRacers and about how welcoming it is no matter what your standard.  Through the years some TTRacers will tell you I ‘was’ a great pacing partner, unfortunately I have now become the hare for the SH!THOUSE run.  That will changeJ

Always focus on the guy in front, Never look behind you (it is a sign you are suffering) and don’t let your training sessions be your best performances.

My ambition or is it dreaming and a challenge for Terry is to get a performance out of me which will feature in the medals in Dublin Masters and really going for it a National Masters medal.  I think I may be the oldest actively training member in TTRacers and with that my ambition most of all is to be still running in 20 years times and even if I am the only person in the race the medal should come – Terry note!.  Ohh and to lose the mantel of being the ‘Hare’ for our next SH!THOUSE run. 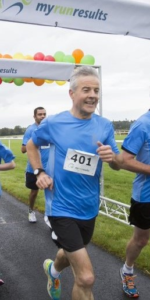