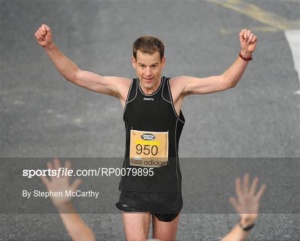 ming thick and fast with these at the moment. I have a few more to send on in coming days so if you sent me on your one and I haven’t put it up , I will be doing so in the next few days.
Today is one of the group who has been with us from almost the beginning. He still manages to be very competitive and picks up a number of prizes in his age category. He also has been very encouraging to others in the group  and is great to train with, Today’s profile is Peter Gray.
1. How did you get into athletics ?
I was decent enough cross country runner at school but had a complete break from all running between ages 17 and 36.  A colleague of mine at the time was helping to organise the inaugural King of Greystones triathlon and asked me to have a go.  That rekindled my running interest and I pushed on that year to complete the Dublin marathon.
2. Why do you run?
There is no feeling like running outside, be it in the mountains, by the sea, in the local parks or with the gang in Ringsend of Trinity.  Its good for the head, the heart and the legs.  It also is a great energiser.  More recently I’ve got involved with a crowd called Sanctuary Runners – running with people living in direct provision, which has been a really positive thing.
3. Did you try different events or where you always a distance runner ?
Those who have run with me in the sessions know that I am very steady and consistent.  This is great when it comes to interval training, and handy enough in the long races.  Its not so great when I’m in a sprint finish at the end of BHAA races (looking at you Fergal and Paraic).  So always distance.
4. Can you give a brief synopsis of your running career to date ?
13 marathons, plenty of half marathons, 10k and 5k races.  I’ve managed to win 2 half-marathons, both of which were in the Orkney Islands – I was the course record holder for Rousay, one of the lesser populated islands.  Moral, find a race with few enough entrants.
5. What would you consider to be your main highlight ?
Achieving my first sub-3 marathon (Dublin 2009) at the 8th time of asking.  There had been two misses by seconds in previous races, as well as some spectacular collapses in the latter stages.
6. When did you hook up with TTracers and what was the reason for doing so?
I’ve been with TTracers since 2007.  I remember watching my New Ireland colleague Dan O’Carroll effortlessly lapping College Park and asked to join the gang.  I’d not trained in an organised way before and the improvements in my running were huge.
7. what would be in your eyes the main advantage of being part of TTracers ?
I really enjoy the Tuesday, Thursday and occasionally Saturday sessions (in truth for me the training can at least as good as the races).  The gang is really supportive and positive and we definitely train better together.  In my first few years there was a great buzz from pushing boundaries and running PBs.  Whilst its not like that now (I’m getting better at getting age group prizes) the sessions are still great.  Its also good to have a group to work with in races/ socialise with after.
8. What’s the best running advice you’ve been given which has helped you to become a better runner?
I can remember having a coffee with Caitriona Jennings after my 7th marathon attempt ended well shy of the 3 hour mark and I was losing belief in my ability.  She talked me through her training programme and it was obvious that the thing I was missing was working hard enough.
That and the advice from Terry not to go off too hard in the first reps of the interval.
9. What’s your running ambition going forward?
To run for many more years, winning a few age group prizes – ie to slow down at a gentler rate than everyone else!  And to run every leg of the WW relay – only legs 3 and 8 to go.