According to my Mum, from the age of 6, I always wanted to run – I was told I had to wait until I was 8 to join the local running club. By then, I had started ballet, swimming, gymnastics and other things so it wasn’t until transition year in school that I joined after school athletics. I wasn’t much good at the sprints or jumping or throwing events, and so I just ran around the hockey pitch over and over again!! My PE teacher at the time suggested that I join a local club and she gave me contact details of Dundrum South Dublin (DSD).

I run for a number of reasons:

I run because I’ve been running pretty consistently (bar the occasional injury/ poor motivation) for 18 years and feel it’s nearly part of who I am and what I do.

Running gives my week structure – and whether it’s a good thing or not, I’m definitely someone who likes routine.

I run to meet my friends – there’s no better way to spend a Saturday morning than joining Terry’s tempo group.

Running gives me motivation/ energy to do other things.

I run to make new friends – when I was on the move with college or with my job, the local running group was always my first port of call. It never failed on any occasion, and also got to know my new surroundings as a result.

I run because I enjoy it. I’m not motivated always to run – many a time it can take a lot of self talk to get me out the door, but I nearly always feel better for going.

Running also clears my head and sometimes gives me the answers to things I’ve been dwelling on all day.

I run to compete – a race can help get the best effort out of you, and a wonderful sense of achievement/ relief when it’s done.

I also love how the races bring you to places you would never go to otherwise – from small towns/ cities/ mountains/ industrial parks/ random fields!! It’s a great excuse to travel the country with a good purpose.

I always favoured the longer distance – I’m not very speedy (everyone loves a sprint finish with me!!). The shortest race I have run is the 1500m but not in a long while – even when I used to run on track I would always opt for the 5000m – usually the longest race available.

I also like cross country – the conditions can help slow the pace of the race, and I like the variety of terrain. Cross country is also a break from the competiveness against the clock, as it’s all about positioning.

The National Novice and Intermediate wins were my biggest wins at club level and meant a lot. I was lucky to get the wins – and still remember the finishing straights.

I continued to race under DSD and still do, but for a time while I was in university, I ran for Dublin City University (DCU). I was in the same class as Fionnuala Britton (McCormack), which was a real eye opener to how the elite trained. During this time, I was also privileged to run on the same team as Linda Byrne, and so with two Olympians on your team we shared many successes.

In 2008 I ran my first half marathon in Wokingham in the UK and clocked a pb of 77mins which still stands as my pb.

In 2008 I ran my first marathon in Rotterdam and clocked a pb of 2hrs 45mins which still stands as my pb.

Writing this I’ve realised my first attempt at a distance seems to suit me!!

After this, things got a bit bumpy on the running road  – I never stopped training but could not achieve any of my race targets.

Fast forward a few years, I had the opportunity to run on the European mountain running team in 2017 and last summer was edging a bit closer to my old pb territory over the 5km, 4 mile, 5 mile, 10km and 10mile distance.

I think my marathon of 2hrs 45mins  – I didn’t appreciate it at the time but have over the years learned of its value.

Terry can correct me if I’m wrong….but I think TTracers and I started with the Wicklow Way Relay back in 2014. I had known Sonya from our previous DSD club days and was contacted by Terry about joining the Wicklow way relay team. I didn’t know what I was signing up for, and before I knew it, I was running a recce of leg 3 and leg 4. I honestly could hardly walk for a week after, and didn’t run a step for the week before the relay due to the DOMS –- despite all my years of training, the mountains had beat me!

TTracers brought a social side to my running. Over the years, TTracers has taken the nerves out of training and racing for me.

I think the group gives great support and motivation in an individual sport. It allows you to focus on others’ goals and to enjoy their successes, and not just your own.

‘This is what you have trained for’.

I was once told this before a race, and still helps settle the nerves.

To appreciate every race finish – especially the good ones.

Many running achievements have passed me by because I was too focused on my next training session or race.

Another ambition is to keep my fitness so I can keep up when TTracers reunite. 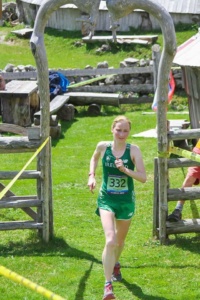