Another one for you all to read. I forwarding on another of our newcomers to the group . As he mentions in the profile , he asked me would I be able to get him to run a sub 3 hour marathon . I was very confident of this judging by how he trained early on with us. Not only did he break 3 , he ran under 2.50 and I know there is a lot more to come . Martin also has huge potential  on the hills as well.

How did you get into athletics?

I was 15 playing Gaelic for the football for the B team in Cuala and knew a lack of stamina was holding me back when the team disbanded. I joined what was the A team and became one of least fit guys on the team. I secretly started taking up running at the weekend and gradually became one of the fittest on the team. Conor Dooney was the captain of the cross-country team in school, he laughed when Icame down initially but, after seeing how I did in a cross-country race, he knew I was taking running quite seriously and took me under his wing.

I run to test what my limits are and push them back a bit further, enjoying the path of discovery, fulfilment and satisfaction along the way.

3. Did you try different events or where you always a distance runner?

When I took up running, I always started slow and built momentum and it always worked to my advantage so I knew straight away shorter distances weren’t for me.

I started off doing cross-country in school training at lunch times with Conor and Kevin Dooney. We had couple of near misses on Leinster schools’ medals. During my undergrad I dropped off as  the DIT Athletics team was quite dysfunctional. During my masters in Queen’s I joined the Athletics team. Doing a marathon was always on my bucket list and I had airmiles which were expiring so I used them to enter the French Riviera Marathon in 2014.  I missed out on a sub 3 hour marathon over the last few miles. This then became an obsession to break over the next 5 years.

Last year running the Great North run. It was the first time in my life everything seemed to be on sync. The weather was perfect, the course was open and I was able to use all the training from Tuesday and Saturday sessions to really push on at the end. It was like I found a reserve tank of gas! Seeing my partner Tash after crossing the finish line is something I’ll never forget.

6. When did you hook up with TT racers and what was the reason for doing so?

I hooked up with the TT racers after the Wicklow way relay last year. Paul Dunne who I used to run with for Blackrock had smashed Bohermeen that March. He put this all down to his amazing coach and running group. He suggested that I give it a go and come down for a session. My times for marathons were getting progressively worse so I decided to join the group after Terry promised he’d get me a sub 3 marathon.

The community feel. Everyone in the group wants to help each other pushed forward and help you in anyway they can. You can feel that people are genuinely happy when you succeed.

Besides to go and join TT racers??!! My physio Karren told me that my running technique was the cause of a lot of injuries I was suffering so over the course of 6 months, I transformed from striking down with my heel to the ball of my foot. This helped me increase my cadence and I began to run more economically.

I want to get more into IMRA races and really try and see what I can do on the mountains. The marathon monkey is off my back so I’m really open to trying out new things. 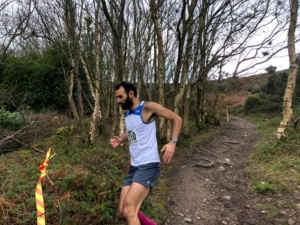