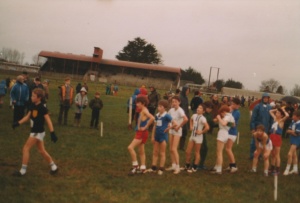 I’ve attached a photo of me coming 101st as a juvenile, I’m in the blue vest blue shorts, 3 from the left, hand on hip. I can still remember the day, heartbreaking!

I was in an athletics club in my home town of Cavan from age 8 til about 13, then gaelic football took over. Athletics was big across Ireland in the 80s, there were loads of clubs in Cavan and Ulster and across the country. I remember the road leagues, cross country championships and track and field. We used to get buses all over the place for competitions. Highlights at the time were reaching the u13 all-ireland 4x100m final as part of the Cavan team which was run on the track in UCD. I also made national cross country championships with the Cavan team, the race was in Thurles and I remember coming 101st, I still vividly remember the hurt of coming so far down the running order, I thought I was handy enough but it was a real eye opener for me and I think I started to concentrate more on Gaelic  football from then on.

I always ran a little over the years when I was playing football and soccer, I’d enter the Great Ireland run and some 5km or 10km races just to complement the football training. I gave up competitive football when the children arrived and when I was turning 40 decided to run a marathon, so that’s when I got back into the sport

I love the feeling I get when I go for a run, I feel in control and refreshed, it clears the head. I like the structure around training, I think it’s a good habit to get into. It provides a lesson for other parts of my life. It’s very simple, you get out of it what you put in.

I like middle and long distance running and I got into mountain running thanks to a pal of mine and fellow TT racer Ronan Hickey, who I went  recce’d leg 2 of the Wicklow Way relay years ago before I really knew what the event was about. It was a beautiful evening and the scenery was spectacular and I thought I’d like to do a bit of more of this. I then started to run the IMRA races, which I found really enjoyable.

Apart from the Juvenile years I started back running when I was turning 40 and ran the Dublin Marathon in 2011. The initial goal was to run 3:10 and as training progressed the goal crept and finished up with an aim to break  3 hours, which I managed to do running 2:56. I joined Donore Harriers and started dabbling in club running and I enjoyed the masters cross country races. We had some good successes at that with a team national gold medal in 2015 standing out, we had just the bare 4 for a team and I was suffering from a cold that day but managed to hang onto a few places so we got the team gold. As I said before I got into mountain running which I really enjoyed, I loved getting off the roads and forgetting about times and pacing and just pushing myself to see what I could do. Those races are really hard and I wish I could transfer the effort I put into them to what I run on cross country or roads but it’s quite difficult to do

Main highlight is making the Irish masters cross country team 5 times for the British and Irish Masters cross country championship. Since I heard about that competition I made a big effort to get on the team and was lucky enough to make it for a few years. The weekend of the races is a great buzz, you meet lots of interesting fellow runners

I used to notice a bunch of runners running around Trinity College at lunchtime during the summer, when I was training for my first marathon, I went up and asked if anyone was training for Dublin and a bunch of hands went up,Terry said I was welcome to join in and train with the group. I remember the first time I togged out asking what was the session and Terry said 12x400m, I thought I misheard, I didn’t think that was possible. I struggled around about 6 or 7 and then gradually over the next few months was able to hang on for 12.

I got friendly with Graham Hopkins who told me to join Donore Harriers, so I’ve also been running with Donore since then.

Forget about your watch, run on feel

I’d just like to keep running, stay competing at masters level, perhaps make the Irish masters cross country team again  for the British and Irish Masters event and an outside dream of breaking 2:40 for the marathon.