April 2014 I signed up to a work related Charity 10k…… and then had to train to run a 10k. I had a coffee with a colleague prior who innocently asked “so what time are you going for?” Little does he know the monster he created?

While I have always had a strong interest across all sport and do remember being fascinated as a kid to the meets shown on ITV in a golden era for middle distance. Yet I never saw me running….   just did not see the point……….a person can change their mind ; )

Surprisingly to myself I really enjoyed the training and was intrigued how tough and attritional it was. Why did legs my hurt so much? The bug had bitten and here we are six years later and I am filling a profile…..

I simply really enjoy it. And all of it…….. head space on an easy run, banter at sessions or a long run with a group, hard sessions, races….

Also with work and family commitments, running is a great sport to fit around these

and keeping fit and healthy has always been important to me.

At the age I came to running I think distance was the only option. I played a lot of hurling, rugby and soccer at various stages in my life. In younger days when I played other sports ‘ a good engine’ was not an unheard description – which at the time was perhaps politeness for shortcoming in technique – however ultimately I think it was not far from the mark as I think endurance sport suits me.

So that 10k….. my answer was I hope to break 45min… he laughed…. which of course was red rag to me. I ran 41min something which of course my competitive self immediately suggested that I could break 40min. I needed to go again. I decided (with bating from a neighbour) to try a HM so did the race series getting under 90min target by 8sec. The trend being I enjoyed setting a target and going for it.

So I decided running was for me, signed up for my hometown (Limerick) marathon and joined Brothers Pearse in January 2015 to help prepare me.  Ran Limerick that May and focused on marathons doing DCM each year 2015-2017. Since then I have been focusing on trying to get faster over shorter distances and I particularly enjoy XC I think because times are irrelevant – it is trying to catch that guy in front and stay ahead of the guy behind. I tried different distances and surfaces including a bit of indoor a couple of years ago. I have been fortunate along the way to pick up Dublin and Leinster individual and team medals at an array of distances from 3k to Marathon and also a couple of national XC medals with Dublin.

Last year I made the Irish Masters XC team.

In terms of achievement – going from literally zero (except running after a ball) to a sub 3 marathon in 18 months is probably the best achievement even just in terms of convincing and getting my body to do that.

After DCM in 2016. Just prior I was running at lunch time passing SMP, during marathon tapper, and spotted Kieran Murray who I played soccer with Terenure for a number of years. I was thinking firstly…….. that session looks swift…. And then it would be great if I could hook in with that group. Through work and family I was struggling to make club sessions and also the quality of session at that time was very hit and miss depending on who turned up. After a marathon break Kieran reached out to Terry on got me onboard. Straight way the quality of sessions I felt was of huge benefit and that was in December normally a quiet month.

Main advantage is community of purpose. Terry drives the group with a huge passion for the sport. My experience is that everyone in the group is trying to get the most from their running ability and also takes a genuine interest in supporting and pushing on the other members of the group. That is then enhanced by the exceptional quality throughout the group. 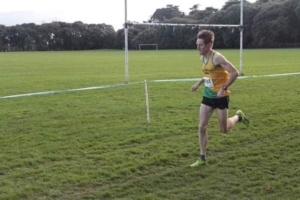 “Keep doing what you are doing”.

The advice was not specific to a session or a short plan. Advice is there are no short cuts in running – it is a long term process of building fitness/endurance/speed/improvement. You may well see spikes where you knock a chunk from a pb. Runners are such an obsessive bunch we look to how we trained/ate recently before the race…….however the answer is more what you have been doing consistently over the longer term.

Age in the manner of Des Kennedy ; )

Continue to improve. Stay fit and continue to compete.

Try out the hills……… I had planned for trying some of the IMRA races this Summer…..bit of delay on that one.

Most of all to continue to enjoy my running  for years to come………..