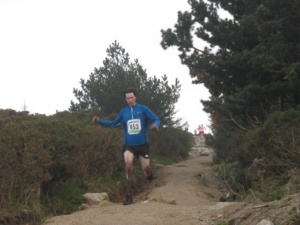 Inspired by the Tour de France, Cycling was my first love; the immersive nature and endurance of the three week event, the passion of the spectators, the fabulous scenery…. I wanted to be the next Stephen Roche or Sean Kelly. The problem was I couldn’t join a cycling club because I was too young for membership, so I started running as a supplement to my cycling training and for some variety. I enjoyed running but I found it strange that one couldn’t run hard every day. At the time I was perplexed by the naming of the sport. I wanted to say I did running, not athletics, but I was on the ‘athletics team’ going to athletic events. Despite this, there was two things that encouraged me to train regularly and get into athletics at the beginning, both associated with my school:

#1 When there was a school race, if one was selected on the team it meant you got a half day. This was very important for a 12-year-old! The teachers were strict about who was selected for the team and they emphasised training regularly. As soon as I found this out, I decided I was going to train every school day.

#2 The weekly Physical Education (PE) class: I use to see this class as a trudge, but when I started running regularly PE became a cinch. What’s more, what others viewed as ‘punishment laps’ was my sport -a change in perspective was so empowering!

The first thing I learnt about running was in primary school about the history of the marathon; the soldier Pheidippides ran from the battlefield at Marathon ~25 miles to announce the defeat of the Persians to some anxious Athenians, and then imploded from the effort. As a 10-year-old hearing that story I wondered how someone could be so unprepared for exercise, especially a solider. At that time, I took to heart the moral that one’s health really is their wealth. Exercise and being fit has always been a part of my life and if I don’t run in the morning, the whole day feels like I have forgotten to do something. Running for me is a lifestyle choice, it doesn’t matter if I go fast or slow so long as I lace up the shoes and get out.

Sprinting -Watching my first Olympics on TV, I really wanted to be a sprinter because the 100m seemed to get the most attention. It seemed so prestigious and glamourous. After trying sprinting I quickly realised I had no speed, which meant the cross country in winter and middle distance in summer were the only choices.

Mountains -As an adult I really wanted to be a mountain runner…but I struggled with the descents. There was one race I got to the summit in joint second, and I was sure I would make my first podium finish especially with the smooth underfoot descent. The only problem was a downhill section of about 400m which was rough and rocky. I lost 6 places there, which is one position for every ~67 meters. Once out of that section I managed to get two places back, but even with practice I ended up getting slower on the rocky stuff instead of quicker. I like to train in the mountains but don’t feel the need to race there anymore!

Ultrarunning– In 2015 I tried an ultra race and I hit levels of tiredness I didn’t know existed. I finished the race happy in the knowledge that I could now say ‘been there, done that’!

I had some early success making the Dublin under 11 (or was it under 12….I can’t remember which) team for the annual Dublin v Liverpool cross country. At secondary school we had a good cross country team and won some team medals. I did running but didn’t consider myself a runner because I was supposed to be a cyclist! My improvement was limited because my younger self didn’t realise that success was talent + training, and not just talent on its own! After a hiatus from the sport, I started running regularly again when I was living in South Africa, as I thought it would be a good way to combine fitness and sight-seeing. Running is very popular there, and some races are in very scenic locations. I found this was such a great combination I was quickly running 6 days a week, and I won my first race: The Greyton 5k Trail. I was eager to keep up the feel-good factor of being a runner when I came back to Ireland 14 months later.

A sense of adventure led me into mountain running for a few years, and the highlight was being on the Masters Team that won silver at the Europeans in 2017. Most recently, I won team bronze in this year’s Leinster clubs cross county.

The most satisfying race I ran was the K-Club 10k in 2017. I had broken my 10k PB a few weeks before and I took almost a full minute off that time at the K-Club breaking 34 minutes. I found a rhythm early on in the race which felt like the edge of my ability, but it seemed strangely easy and at the same time exhilarating. It was one of the few races I ignored everyone around me and ran at my own pace, i.e. foregoing the opportunity to draft off other runners. When I finished I had wondered if I had started quicker could I have run faster? I changed my mind over the next few days as fatigue hit and I realised how much the race had taken out of me, also how I had given my maximum performance. It took me two years later to break 17mins for a 5k race, even though I broken that time twice during the 10k. One should treasure the PB’s when they come and this one was special!

In 2016 I was doing a lot of mountain running races and as the season was nearing the end I entered the Frank Duffy 10 miles expecting a PB. I was in good shape for the mountains, but I was naively taken aback that it didn’t translate over to the road. I ran the 10 miles much slower than expected and I realised I could improve by joining a training group. Especially as I had mostly ran on my own for the previous 5 years, without any interval or speed sessions. I asked one of my mountain running friends for advice, and they said do not spend time considering which clubs, just go to TT Racers. After a few months of regular tempo runs and interval sessions, I entered another 10 mile race and smashed my PB😊

Aside from being around more people with a passion for running, having the opportunity for regular and accessible training, the mix of experience and enthusiasm in the group environment; one advantage is the information exchange. For example, which tech is essential/avoidable, recommended physical therapists, critical evaluation of fad diets including can one run a marathon without breakfast?

For the members I don’t see at the Tuesday/Saturday sessions, I can see what races they are up to in the weekly report. There is the opportunity to organise small groups on other days, and race trips. The annual awards night is a really nice part of the group, and when December rolls around, everyone is talking about the Handicap 5k race: it is unique, exclusive to members only, everyone has an equal chance of winning and all the inter-group competitiveness comes out!

“If you’re running at a pace that you can’t hold a conversation; you’re going too fast!”

I used to not be able to run more than 50k a week without being injured mainly because I didn’t feel I had trained properly unless I ran so hard that I was exhausted at the end. When I eventually learnt to run slow and feel ok about finishing fresh, I found I could run more miles and be injured less whilst enjoying more sociable slow runs. Running slow paid off with increased training, and faster sessions.

My biggest ambition is to finish a marathon without blowing up! I did two road marathons in 2016 and lost almost 20mins in the second half of both . One of them was a sub-3 hour time and that left me feeling satisfied with not needing to do another one. There is so much adjusted training to do in advance, and so much time to recover afterwards, doing a marathon takes a big chunk out of the year. Thanks to a developing competitiveness seeing more and more group members beating my time, I feel the need to do the 42k again. I am going to continue my sabbatical from marathons, but the ambition is to take up the 42k again when I am 42 years old!