1. How did you get into athletics?

I got into athletics twice in my life. The first time was when I started secondary school and fell in love with cross-country running. That affair lasted for six years and was ended by my taking up smoking on the same day that I won the school 1500m championships. I got back into running when I gave up playing football in my mid-thirties and entered the Dublin marathon as a replacement form of exercise. I don’t envisage falling out of love with running again.

I get out of running what I put into it. I get to choose what running I do, where I do it and how hard I do it. Improvement and enjoyment are down to me.

3. Did you try different events or were you always a distance runner?

I started with middle distances and the steeplechase, gave up for twenty years, and then resumed with hill races and marathons. However, I last ran a marathon in London in 2015 before I was advised to limit myself to 10k or less due to a congenital heart condition that I was completely unaware of. I only found out about it when I went for a VO2 max test in the physiology lab in Trinity. I went into those tests with a view to upping my training – but left with significant restrictions being placed on my activities for the past 5 years.

4. Can you give a brief synopsis of your running career to date?

During my first career (1987-1993) I ran for the school cross-country and track and field teams. I picked up a few medals at East Leinster and Leinster along the way and set a school record for the 1500m in 1992 – beating the class bully and my best friend’s nemesis in a sprint finish to the tune of the cheers of everyone who had been bullied by him. I was mobbed at the finish. It was one of the greatest feelings of my entire life.

Since I have come back to running I have mainly focused on hill racing. I find the environment, the excitement and the camaraderie addictive. Highlights over the past few years include second-place finishes at Brockagh and RunTheLine, coming third with the Hurt Squad at the Wicklow Way Relay in 2019 and winning the M40 Winter League title in 2018.

Undoubtedly it was being part of the winning TT team at ‘The Relay’ in 2017. I was quite anxious in the build-up to this race because I was the slowest runner on the team (we were required to have an over 40). But I was also really buoyed by the fact that I was competing with runners of the caliber of Tom Lupton, Ian Conroy, Laura Shaughnessey and Rory O’Connor. I have never taken a race so seriously. I reccied the route several times, backwards and forwards, in the weeks before the event. I got all my preparation right – sleep, training and diet. I gave up eating doughnuts. It was an incredible experience, and one that I will always be very grateful for.

I joined in the summer of 2014. I work in Trinity and I used to cast an eye over to the TT sessions while on my lunch break. I would mutter with disapproval about all of the bronzed six-packs on show and thought that I would never want to be in a group like that! Rob Costello suggested that I join, and from the very first session I loved it.

7. What would be in your eyes the main advantage of being part of TT racers?

Being a part of sessions that I would never do on my own. The value of TT racers has really been brought home to me in recent weeks. We have formed a satellite TT group in North Wicklow during the Covid-19 restrictions and getting to meet and train and push that bit harder with like-minded runners has been invaluable during this period – physically, mentally and socially.

The community element is really important to me. Sunday morning reccies for the Wicklow Way relays with other TT runners are thoroughly enjoyable. Meeting up with familiar TT faces at events helps calm the nerves. And if Terry is there, you have to run at your best, even if you weren’t planning to.

The support that I have received from Terry and Sonya and other TT runners since my surgery earlier this year has been invaluable. Brian Kitson, Aidan Blake and Rob Costello, in particular, have been the most supportive of friends to me throughout the past five years and have got me back running in the mountains in recent weeks. They have gone way above and beyond, and I’ll never forget it.

Always have a Plan B. I was never more primed for a good marathon than I was for Dublin in October 2014. I had one plan – sub 3. I went through the first half in 1.28, but felt a bit unwell soon after. I was single-minded and pushed on, when I should have held back. By mile 21 my quads popped out and my knees locked. I walked/jogged to the finish. I hated that marathon and took a few weeks to get over the disappointment. Six months later, I could feel the same thing happening in London by mile 19 but instead of pushing on, I pulled back and tried for a PB instead. I made a pact with myself that sub 3:10 would be great. I ran in for a 3:02 and a brilliant experience. I loved that marathon, not knowing that it would be my last for some time.

I had open-heart surgery a few months ago, so my short to medium term ambition is just to get back running and to enjoy it. I have been instructed to keep it at a low-to-moderate intensity for a while. 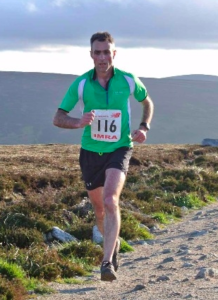 Longer term, I have a marathon to run in October in Donegal. The plan is just to get around – so no plan B required.