This weeks profile is of one of the originals who joined the group when we more a middle distance running  group ( 800m -1500m ) at the time. He has managed to keep in good shape and still picks up age category prizes .This time its Pearse Coyle
1. How did you get into athletics ?
I had rowed through school and college, in Athlone and Dublin, and from the running training we did for rowing I knew I was fast-ish so when I finished college I joined Liffey Valley AC – partly to keep fit but also to see how fast I could get with proper training.

To keep fit, to stay sane and because I love the competition. At age 54 it feels pretty good to win the odd Parkrun – though I haven’t won one since my birthday!

I started with cross-country and at school we managed to win the Connaught Schools Cross country championship one year. I did no competitive running then until after college and I quickly established that I was a middle distance guy. I’ve always been in an entirely different league at 800 and 1500 versus 5k and upwards.
4. Can you give a brief synopsis of your running career to date ?

It’s a game of two halves. I ran for two full seasons with Liffey Valley AC in my early twenties, the highlight of which was probably my breaking 2 minutes for 800m. In 1992 I had a major accident and despite a miraculous recovery* I did not resume competitive running until I turned 40 in 2006.

In 2006 I did the series of 5k races that Conor Daly referred to in his profile. Each one had a staggered start handicap and since I started from a low base of fitness I managed to beat my ever-decreasing handicap every month for 6 or so months and won or came second in the series. Now I was fit and 40 so I decided to see how I would get on with the veterans track events. Between regular injuries until 2012 I managed to win many Leinster and National masters indoor titles and medals at 400, 800 and 1500 metres. In 2012 I won the national masters outdoor track 1500m and came fourth in the British masters indoors. In 2013 I got a near-fatal dose of pneumonia and after the resultant lengthy lay-off I have struggled with injury since.
5. What would you consider to be your main highlight ?

My mother paid very little attention to my sporting activities and barely registered that I managed to get onto an Irish Rowing crew in 1997 whilst in college. Around 2002 she moved into a nursing home back in her home town of Carrick on Suir and on one of my visits I noticed posters advertising the upcoming Moran Cup 1 mile race. I scheduled my next visit to suit and told her we were going on an outing. I won the race and my mother got great local kudos and press which was specially satisfying for both of us.

This was the Carlow Nationalists take on my second outing at the event.

When I decided to resume running in earnest in 2006 I went looking for a group to train with in the city centre and Michael McGovern put me onto Terry – who was just getting started with a group, then unnamed. Back then we were mostly middle-distance folk and it suited me very well.

The mutual encouragement and the sense of not running alone is the major advantage. As the group has gotten bigger and the number of sub-groups has increased it has been great to be able to slot into different speed groups on my many returns from injury.

Both from Terry: Pace yourself so that you can fully do the session and don’t overtrain, don’t go all-out at every session.

1) Keep running, until they close the box
2) Stay competitive, subject to 1)
* Miraculous recovery is a long story requiring the re-opening of pubs. 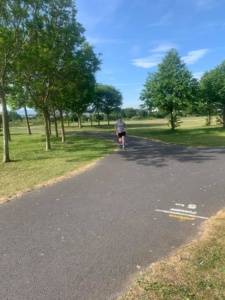