Eight years ago, somebody dared me to take on the swim leg of a Half Ironman Relay even though I couldn’t swim. I trained hard every day for months and eventually managed to become a terrible swimmer. My main weakness was sinking. Despite this, I completed the event and managed not to drown. I enjoyed having a big challenge in my life to work towards but didn’t want to push my luck in the sea anymore so decided to attempt a marathon instead.

I run for adventure. To test myself doing challenges in mountains and on roads where the outcome is uncertain. To discover what my body and mind can do and to get away from the kids.

I vaguely remember being an ok sprinter in school but following a 25-year hiatus I now run marathons and ultras or whatever Terry tells me to do.

I completed my first marathon in a time of 3hr34 in Cork 2013 and did the Dublin Marathon in the same year. Having gone from playing a round of golf and a game of five-a-side football each week to completing two marathons in a year I believed I had become the fittest person in the world.

One day, I agreed to join my pal, Sean Mason and some of his friends, for a “hill run”. I’d never heard of such a thing. I mean how could a person simply “run” a “hill”? Ridiculous. But if anyone could, the fittest person in the world could, so I gave it a go. Half an hour into the run I discovered that I hadn’t even been the fittest person in the car. I remember watching the others disappear off into the distance and cursing them as I found myself alone on the side of the mountain in a crumpled mess, hands planted on my knees, lungs heaving for air. Even so, a love affair with mountain running was born.

I continued to do a marathon or two each year over the next few years, slowly getting closer to the magic sub 3 hour mark, but mainly focused on mountain ultras during that time.

Last year, I concentrated on marathons and shorter hill racing. I was crushed when I missed out on sub 3 hours in Rotterdam by 18 miserable bloody seconds. I began to have serious doubts that I’d ever get a sub 3, but knuckled down with my awesome training partner, Tim Murray, over the summer and completed Dublin in 2hr56. What a thrill.

It would have to be either completing the Wicklow Round in 2018 with my pal, Warren Swords, which involved us navigating 26 summits covering 100km in under 24 hours or my sub3 hour Marathon in Dublin in 2019.

Both involved years of hard work and failed attempts. Sophie’s Choice; too difficult to decide. To be among only 30 people to complete the Round is very special but the marathon is probably the bigger monkey off my back.

Sometime around 2014, my good buddy and great running nemesis, Rob Costello, invited me to join TTracers probably because he wanted to have someone slower than him at the training sessions.

I appreciated him bringing me in because while I built lots of endurance in the hills, I needed a more structured approach to build speed which TTracers provided.

I get a big buzz from the culture of the group. There’s a warm and friendly vibe and I find that people take a genuine interest in what others are working towards. It’s not at all ‘cliquey’ and it’s easy to find someone sound to train with which makes a potentially grim marathon training cycle a joy. I also like that the group attracts so many brilliant women which prevents things from getting too ‘blokey’ which can happen at some clubs. The weekly reports and post workout coffee and chats really foster camaraderie. Love it.

The main advantage for me is that Terry is a straight-talker with a better sense of what I’m capable of achieving than I sometimes do myself and he has his ways to help me realise that potential. I find it invaluable to have someone like that in my corner.

My ultra-running mentor is a legendary running warrior from Wicklow town, named Barry Thornton. He helped me get my head around the concept of ultra-running. I was genuinely terrified by the prospect of stepping-up from events that lasted eight or nine hours to the Lavaredo Ultra Trail which would take me over 20 hours to complete. Before the race, I asked Barry for advice on how I could keep going when I didn’t think I could any longer and he said, ‘accept you are going to fail, but not this mile’.

I wrote these words into my running journal and they’ve served me well over the years. When taking on a big challenge I remind myself that there can be no real achievement without the possibility of failure. This helps me to embrace the fight.

Complete a solo Wicklow Round and maybe one day to become the fittest person in the car. 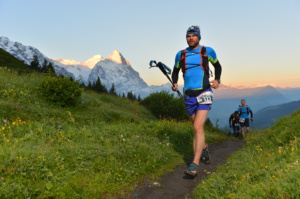