1. How did you get into athletics ?
I was never a runner at school. XC was (and is?) A PE sadistic torture given to us on too many asports Wednesday afternoons on the wafer thin pretext that the football pitches were waterlogged.Running arrived at me in the mirror so to speak in mid 20s.After work and weekend drinking was starting to show on my waistline on what was otherwise a thin frame.The sun roof was starting to open on top too !I couldn’t do much about that ,but a weekend keep fit class at Arsenal FC , which started with a run gave me a taste for running and a potential solution to the expanding waistline…
2.Did you try different events or where you always a distance runner ?
Once I started training it was all about distance for me.
10 miles, half’s and marathons .It was years before I saw the point of shorter races (a means to an
end for longer events?)

3. Can you give a brief synopsis of your running career to date ?

Once I get into running, being from London it was all about the goal of the London Marathon.
I was fortunate in the early 90s to work for a German Company in London that had guaranteed
London Marathon entries. I ran London in 92, 94 and 95, together with a number of HMS along the
way. My HM PB remains 79mins at the Portsmouth HM.
My life changed when I married Noeleen and moved to Dublin in 97.
I ran Dublin most years in the earlier Noughties when the DCM was much smaller and on the life
support of American charities that brought large numbers of participants.
I crossed the running club Rubicon in late 2004 (following yet another 3.02 marathon!)Joining
Clonliffe harriers with Kieran Murphy to crack the sub 3, which I did in Dublin 2 years in a row 05 and
06.
It took me another 5 years to repeat the trick in a double in Rotterdam and Dublin.
In Dublin 11, where I was literally the last finisher sub 3 in the one year that RTE followed the BBC
template in a live outside broadcast.

My triumph on screen was quickly deflated when I got home with my daughter crying with
embarrassment at her daddy’s face on live TV full of spit at the finishing line!

Apart from totalling around 25 marathons,
..In a kind of Moscow Olympics thing where you can only beat who turns up…?
I finished 3 rd in the Connemara Marathon of 2006.
Kieran Murphy ran the HM that day and he still recalls me saying, I am never running that race
again! It was about the only post-race promise I ever kept.

I hooked up with TT Racers more for practical reasons to be honest.
I changed jobs in 2015 which brought me to a work location almost equidistant between
Trinity and Sean Moore Park.
It was also a more sedentary job which brought me full circle to where it all started !. That waistline
again!

The main advantage of TT Racers is the sheer wealth and range of talent and experience.
It’s great to be in a group of similar minded running obsessives!
You find your own level with the different groups. The talent is such that you can be brought down
to earth quickly.
Many a time I think I am doing well and can crack the next group only to be looking sheepishly at
Terry after one lap…”I should get back shouldn’t I?”
TT Racers have also been a great support for me in the last couple of years in my family
circumstances.
I have also gained new friends that are lifelong friends and not just running colleagues.
I hope to back in the summer following recent surgery 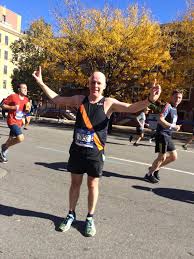