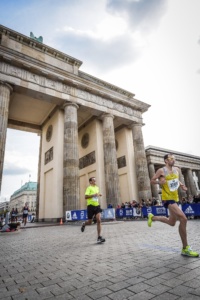 I have no athletic background, but I have always been quite sporty. As a kid I tried nearly every sport, including obviously football (it is pretty much mandatory when you are an Italian kid and you want to try and have friends). I was crap at everything. I would also get bored very easily and I would just try something new. Volleyball was probably the only sport that I ever got decent at, and I stuck to it for quite a few years, but I gave it up when I moved to a different city to go to university. As a teenager, I also took part in some weekend events in Italy where people could either jog or run, with no chip time whatsoever, no ranking/results, and that were organized on varied distances and terrains. I wasn’t competing, and I could not consider myself a runner, but the endurance aspect of the events looked awesome to me.

And the New York Marathon was already back then one of my favorite things to watch.

More than anything else, I look at it as a lifestyle. I enjoy the feeling of training, its weekly structure, the way running helps me make sure that I find some time to take care of myself and to switch off from whatever keeps me busy or worried. And if I don’t find time to exercise for a few days in a row, the lost habit reminds me to do something about it. I have to be honest: for me it’s not always fun. There are times when I am in the middle of hailstones and whatever element the weather has in store on the day, and my legs have no interest in any negotiation, and everyone breezes past me, and I just tell myself that there are so many places where I would rather be. But some different random day it all clicks when I expect it the least, and it makes it all worth it. I do also like having a goal to work for and I tend to focus on one or two main races a year.

Back in 2008 I decided that I was going to run the New York Marathon. I was literally the typical recreational runner that watches a sport on TV and goes like “That’s it, I am going to do it. This year is the year!”. Turned out that 2008 was not going to be the year, as I was clueless to the point that I did not know how hard it is to get into that race (with the lottery and all that jazz).

But I did manage to go in 2009. I was not in any running club. I did not know anyone who knew better. So I figured: since I have to run 42k, I better start with a half marathon race and do nothing shorter. Long distance races became all I focused on.

After New York in 2009, the following year I did Paris and then New York again. For me it was still about finishing, as I thought it was a challenge in itself. Whatever time I was going to run, at the end of the day in my mind I was not a real runner and I should be happy with any result.       I joined the running club Crusaders I think in 2011, literally by accident: I was doing an easy run one night, on my own, on the track in Irishtown. I thought that a one-hour easy run on the track would be an exciting change to my routine. I did say I was clueless.

One of the coaches from Crusaders saw me doing my goal-less laps and she suggested that I join their session.

I accepted the offer, and I hated every second of that night. I was simply too unfit to sustain that intensity, and I had no concept of pacing. I got to the end completely depleted and defeated.

But I did thank the coach, and I decided to go back.

My marathon in Berlin in 2018. It was my 10th marathon and the first time I broke 3 hours. The 3 hours thing is something that many runners can relate to, but for me even more than the finish line itself, and even more than the relief of seeing everything come together on the day, what I remember the most from that race is the last 4 km, where the watch was showing that I was on target to make it, but I felt so much on the edge that I just thought that I could as well blow up at any second.

You train for months, and sometimes all you remember is just a few minutes of the race.

I joined in May 2017. I always struggled with consistency with my training with Crusaders, mainly because the time of the evening sessions really did not suit me and I could not leave work in time. My weekdays lacked quality and I was pretty much only doing the Saturday session and the Sunday long run with the club. After my initial improvements, I quickly plateaued.

Multiple runners from Crusaders, including some who are not in TT Racers, told me about “Terry’s group”, a group of runners who train at lunch time and they insisted that the group would be a great way for me to become more regular with my sessions.

I immediately enjoyed the grass track of Trinity college, running in daylight during any season and with so many like-minded people.

I find being surrounded by elite athletes inspiring rather than intimidating. I don’t mind being lapped when I know that I have the chance to run beside international athletes. And everyone is working their butts, in all groups. You can have a bad day or just be less fit than you normally are, and when you go back by a group, everyone is working as hard as the group in front. The fact that the group includes runners from any club adds to the density of the field and it’s a major strength. You always have someone a tad better than you are that you can to look at.

Probably the idea that you are not supposed to race a session. I used to think that you have to go 100% in training, all the time.  Anything short of that looked like weakness to me.

I now think that the only way to make your training sustainable is to make it sensible, and that there is no prize in finishing a one-hour tempo five meters in front of the group that you could have worked with.

I would like to improve my marathon time from 2018. By how much I can, I have no idea.