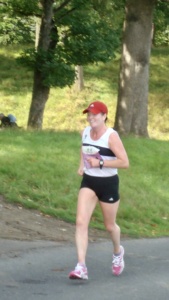 I got into athletics when I was 33 in 2004.  Nearly a master.  Prior to that I had done a bit of rowing throughout my twenties, though as I approached my thirties, on a more leisurely basis.  I was out on the river one evening and knew Donore Harriers clubhouse backed onto the river and saw a training session going on.  I had always known about Donore Harriers.  Coming from Dundrum, DSD AC (Dundrum AC then) was very active in recruiting youngsters.  I had no interest though, but most of my family were probably all members at various stages.  My sister was an accomplished runner in her day, but it all passed me by.  You couldn’t have paid me to run.  So, twenty or so years later, I went down to Donore to see if I could join a training group.  I wanted to run the Mini Marathon, and just wanted to get a bit of structure or regime into my running.  Met the wonderfully open and welcoming coach Jim McNamara, and never looked back. Jim instilled such love and discipline into his sport that it was infectious.

A very hard question to answer, I suppose participation comes to mind.  And meeting like-minded people.  I love running and it’s just a part of my day now.  I also run because I like to compete – even for me at a moderate level.  When I started running with Donore Harriers, I was really happy to have found sport that I could compete in again, especially as a master athlete who was just coming into the sport.  I was really impressed with how Athletics Ireland and all the clubs in the country had fantastic race opportunities for master level athletics. I could be wrong, but this doesn’t happen in all sports.

Have only run distance.  To be fair, having got into the sport quite late, I don’t think I’d have lasted in the blocks!

Running with Donore Harriers, cross country features hugely in my running to date.  Though probably not as much in the last couple of years.  I was on cross country teams from the get go and basically didn’t know anything else for a few years.  That was no harm though, as I love cross country.  I managed to score on a number of teams winning medals at county, regional and all-Ireland championships.  The odd gold too!  I also competed as a master athlete.  I also ran road races, and competed regularly in the national half marathon championships.  That was mainly before I had my daughter, who was born in 2013.   If I’m being honest, I have struggled to find a good solid level of fitness to race well since then.  Don’t know why, but I suppose I just didn’t bounce back like a lot of women do after having kids.  And fair play to them.

I have so many highlights from running.  I have been lucky enough to get so much out of it over the years.  I have many great memories of cross country races (with Barbara Murray team mate), and of many good times for me on the road, eg, the first time I dipped under 70 minutes for 10 miles, the first time I dipped under 20 minutes for 5K.  One particular highlight was winning a national senior silver medal (team with Florrie and Anne Curley) in the half marathon championships in 2009.  I’ve a few other championship medals that I have tucked away and I really value now, mainly because I haven’t won one in about 10 years!

I was running past the group on a Tuesday lunchtime in 2015 and saw a few runners that I knew.  I was finding it difficult to get down to training in Donore during the week due to work/childcare commitments, and we were planning on moving out of the city, and so away from the club.  I went over and met Conor Patton, Terry wasn’t there that day, I don’t think.  I was delighted to find a friendly and supportive group to run with again.  I don’t do well training on my own and need the group aspect, and a bonus was that it was during lunchtime and it was close to work.

Without sounding like the class swot!  I would have to say the coaching.  Terry’s commitment and quiet support is brilliant and like all good coaches you can feel his enthusiasm and love for the sport.  I have also made some really good friends in the group, and find the training challenging – in a good way!

I have been given lots of advice over the years, some unhelpful and unwelcome.  But I suppose the best advice is to listen to one voice, be that your own or your coach’s voice.  Do the hard work and keep things simple is probably all I’d say.  There’s enough to be doing with doing the work.

I hit the half century birthday this year, so my ambition is to keep running into the next half century.  That includes a few races though, so I’m not going completely sofa