1. How did you get into athletics?

Running just came naturally from the beginning.  I have very fit and active parents, so engaging in a sport of some kind was always pushed in our house.  In school, I ended up on the XC team, all enthusiastic and naive.  It’s tough at that age. What am I saying, it still is !!!  I believed that this was what ‘racing’ was, so I RAN away, literally.  I didn’t return to the Sport until I was in my 30s.  Almost a Master, I was introduced to the great Jim McNamara in Donore Harriers……. just in time for XC …. and back where I started!!!

Who doesn’t love a bit of healthy competition!  However, I am reminded in these surreal times that my reasons for running go above and beyond racing.  When I’m feeling flat, I get my spirits lifted.  When I feel stressed, I find calm.  When I’m trying to figure something out, I get clarity.  You get it!  Running is a gift. It is my treasured resource and meets a myriad of needs. It explains why injury can be a challenging time!

3. Did you try different events or were you always a distance runner?

I joined Donore Harriers just in time for Cross Country, so my focus lay there initially.  I moved on to the Road quickly enough after, and I immediately wanted more of that.  I took my time returning to athletics, and I guess I felt that it was a bit late in the day to pursue anything too short.  All that said, I think that if there was a burning desire inside me for speedier stuff, I would not be one to let age stand in my way!

4. Can you give a brief synopsis of your running career to date?

I have enjoyed plenty of team success in XC with my Donore Harriers clubmates.  I’ll be honest, Cross Country never became any less tough for me as an adult!!   The road has always been a different story altogether and I feel more likely to excel there. I’ve worked my way down to sub-19 for 5k and sub-39 for 10k.

There are definitely a few that spring to mind.  However, I will never forget the euphoria at breaking through the stubborn 40 minute barrier in 10k for the first time – New Years Day 2016 in my native Monaghan.   I had been plugging away at this since I joined Donore.  What puts it top of my highlight list, is that I got it just before Jim Mac passed away.  He was still well enough to relish the achievement with me.

I had been studying and working most evenings, and it became next to impossible to train consistently with my clubmates. I started to do my sessions at lunchtime with Elaine Caul at Trinity. It was there that I was introduced to Terry and the group.

7. What would be in your eyes the main advantage of being part of TTracers?

It’s hard to pick one.  I think ‘The People’ covers it all. Whatever I have been thinking about on the way over to training, it’s gone on the way back. There are a variety of groups and it is so great to be able to move around depending on where you are at.  The group wouldn’t exist without Terry, and even though the numbers have grown significantly over the years, nobody goes unseen or their progress unrecognised.  Last but not least, Charlie’s stellar contribution just adds to the unique quality of what we have in TTracers.

‘Running is 90% mental and 10% physical’ was a phrase I heard …. Now, I don’t know about the accuracy of this split, but it definitely struck a chord!   When I reflect back on earlier times, I was very fit, young(er) and not shy of the hard sessions. My body would be well able, but it was my mind that would get in the way every time. Learning to manage the internal chatter, staying in my body, and getting comfortable with the discomfort has been a game-changer. It’s a work in progress, of course, and I have had ample opportunity to develop this skill by doing sessions alone for the last 11 weeks. I feel that, despite getting that bit older, I am a better runner. All my PBs have been achieved in recent years. In fact, I was not far off a PB today in our virtual 5k, so the proof is in the pudding!!

First, I’m feeling fit and healthy, so I’d like to stay that way – I’m no stranger to injury.  Second, probably to become more acquainted with the longer distance.  I wouldn’t say ‘No’ to some more good 5k and 10k times, but I want to shake it up. In the last year, I got a 10 mile race in and a few half-marathons, so that is an excellent place to start WHEN we return to some sort of normality! 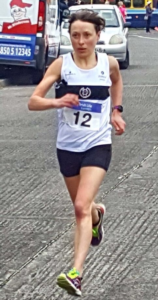