If you thought that there might be a lull in proceedings after the Dublin Marathon then we were wrong. You guys continue to produce the results over varied terrains in a number of different countries. First on the agenda was the World Mountain Running Championships which were held in Patagonia , Argentina. Ian Conroy was our representative and Ian performed extremely well with a 64th place finish.
Still on the international front the Home Countries International took place in Aintree, Liverpool. We had 3 from the group taking part. In the O/35 Tom Lupton was Ireland first finisher in 5th place and helped the team to silver place finish. In the O/45 category Brian Geraghty replicated Tom’s run with 5th overall and first Irish home . Colm Costelloe was 4th Irish home and 1tth overall and also took team silver.
Final result on the international stage came from Tanya Sheridan were she rocked home to win the Velja Trail Challenge in Denmark.
On the home front we had the two Run the Line races and we had 3 of the 4 winners of them. John McAuley won the mens short course (13k) in a time of 58.32. Sonya McConnon beat a recent Irish cross country international to convincingly win the womens race in 62:49 and 9th overall.Caomihin MacMaolain finished in 12th in 65:07. In the long course (26k) Liz Wheeler won the women’s race in 2:34.13 . Next up was Aidan Blake in 72nd ( 2:40.44) with Leah Benson ( 10th female – 2:56.38) and Peter Doyle (133rd – 3:05)
Also yesterday we had a number competing at the Irish Life 6k cross country in Santry. Rory O’Connor made a return to competitive action after a long break with a 2nd place finish overall. Rory was followed home by Conor McCarthy (28th) Brian O’Mhurchu (33rd) Des Tremble (38th – 3rd O/45) David Naylor ( 60th) Andy Davies ( 89th) Joe Corcoran ( 93rd – 4th O/60) and Malika Hammani won the O/40 female category.
On the roads today Ruth Fitzgerald won the Beat the Train 10 mile in Waterford in a time of 59.30 .
Last Wednesday in Dublin city centre was the Run in the Dark 5k and 10k. In the 5k Niall Fox was 11th in 18.38 and Terry McConnon ran 22.13 whilst in the 10k Gavin Purtill broke the 40  minute barrier for the first time with 39.59.
Note ****   I have recieved only about 50% responses about the night out on the 29th November in the Pavillion  and the 5k handicap on the 17th December. We have excellent numbers for both . However if you haven’t back to me yet can you do so as soon as possible so I can plan accordingly.
Regards
Terry
Attachments area 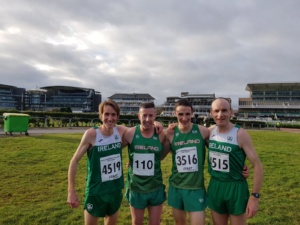