A hectic week this week. Beginning on Thursday , I attend the Athletics Ireland awards where I accepted the Ultra Athlete of the year award on behalf of Caitriona Jennings which is well deserved considering her achievements this year. We then held our own awards on Friday evening in The Pavillion Bar in Trinity and a great night was had by all.
On the racing front we had the Clontarf Half on Saturday with a close battle ensuing between David Tonge and Stehen McEntee with David just edging it with 1:28.22 ahead of Stephen in 1:28.29. Gavin Purtill was our next home with a big PB of 1:31.00 and Conro Patton took the O/60 prize in 1:38.04.
Down in Conakility Anne Curley won the womens race of the Clonakilty Marathon in a time of 3:18.32  with Chris Bigley running 3:35.04 and Robert Gilligan 3:39.54.
In the Half Marathon John Clohisey continued his fine form recently by running 1:24.38.
Johnny O’Brien finished 18th in the Wild Goose 10k in a time 41.19.
I was over at the Dublin Intermediates yesterday which were held in Tymon Park and we had a number representing their various clubs. Alasdair Brown was our first home in 15th place and helped his club to team gold. He was followed by Conor McCarthy (17th) John McAuley (19th) Brian O’Mhurchu (21st) Peter O’Toole ( 26th ) Des Tremble and Conor Keating also finished well up .
Attachments area 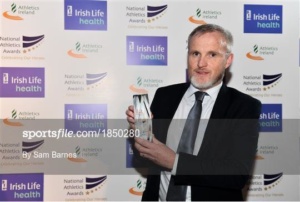